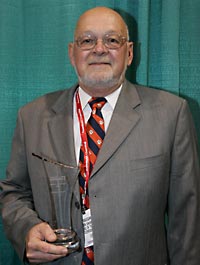 Professor Vaughn graduated from Lynchburg College in 1962 with a B.S. degree in physics and mathematics. He entered the textile field as a graduate student at the Institute of Textile Technology where he earned the M.S. in Textile Technology in 1964. He served as a Research Associate at the Institute from 1964 to 1966 before joining the Clemson faculty as an Instructor in Textiles. During the period 1967-69, he studied textile physics at the University of Manchester in England where he earned the degree of Ph.D. He returned to Clemson in 1969 to continue his teaching and research activities. Dr. Vaughn served as Department Head and then Director of the School of Textiles from 1977 through 1989. His present activities include teaching undergraduate and graduate students, conducting research in the development and analysis of textile materials, and working with the textile industry in the areas of manufacturing, product development, and materials analysis. Dr. Vaughn’s current research and publication thrust has focused on the area of nonwovens.

The development of experimental nonwoven fabrics.