In the afternoon, about 80 guests attended the ribbon cutting ceremony at the Perry plant, among them representatives of the community, Houston County and the state of Georgia. State Governor Nathan Deal addressed the audience: “Thank you is all we can say. This is another great German company. Germany is one of the three leading investors in the state of Georgia.  […] And you are an important part of continuing that tradition.” He also emphasised the team effort involved in setting up a new plant: “All of you are an important part of what allowed this to come to its fruition.”

On his part, Dr. Christian Heinrich Sandler, President & CEO of Sandler AG, thanked the Sandler teams in Perry and Schwarzenbach/Saale, as well as the regional partners in Georgia, who actively supported the establishment of the new facility. “When the decision to build a plant here in the U.S. was finalised, I told my management team: We are facing a marathon”, Dr. Sandler recollected. “At that point we did not know where in the US our finishing line would be. […] In Perry, we found people eager to welcome us as part of their community and new team members eager to take part in building up Sandler Nonwoven Corporation. […] And yet, the plant here in Perry is but one stage of our marathon.”

Together with Governor Deal, Dr. Sandler cut the ceremonial ribbon, officially inaugurating the facility. This ceremony also provided a new starting signal: for the future development of Sandler Nonwoven Corporation with the resulting benefits to the community. During their visit, Governor Deal and his wife Sandra also got a first-hand look at nonwovens production during a tour of the plant.

Tobias Baumgaertel, President of Sandler Nonwoven Corporation, thanked his team, Sandler AG and the local partners for their dedication and support, without which setting up the new manufacturing plant would not have been possible. He also expressed his gratitude towards his family, who took this major step into a new life in the U.S. together with him. Tobias Baumgaertel emphasised the warm welcome Sandler had received in Perry and summarised that the nonwovens manufacturer could not have found a better location for its first overseas plant.

Dr. Christian Heinrich Sandler took a moment to reflect on the beginnings of the company, which had been founded by his great-grandfather in 1879, and milestones on the road that led the German nonwovens manufacturer to Perry. Dr. Sandler expressed his sincere thanks to Tobias Baumgaertel and his team, the staff of Sandler AG, and his own family, who hold various positions within the company and continue to shape the family-owned business. Representatives from the political sphere and regional organisations in Georgia had extended a friendly welcome to the Sandler team and lent strong support. Last but not least, Dr. Sandler thanked the customers, whose continued trust in Sandler made this step possible.

The significance of Sandler’s investment to the region was emphasised by the ensuing speakers. Houston County Commission Chairman Tommy Stalnaker, Angie Gheesling, Executive Director of the Houston County Development Authority, as well as Jimmy Faircloth, Mayor of the city of Perry, thanked the company for deciding to invest in Perry and for the contribution to the region’s development. On this occasion, Jimmy Faircloth presented the German guests with special gifts: Matching the evening’s motto, they received personalised beer mugs and the symbolic key to the city. This gesture made it clear: The family-run company Sandler was welcomed to the “great family of Perry”.

Subsequently, Dr. Ulrich Hornfeck, Board Member & CCO of Sandler AG, led the attendees in prayer and said a blessing.

Bavarian food specialties and music then tuned the guests in on the Oktoberfest atmosphere. A beer garden outdoors invited the people to linger and was very popular. In a comfortable atmosphere, attendees also got the chance to try their hand at typical Oktoberfest-games, such as beer-mug lifting or hammering nails into a log, in the course of the evening. The location – a spacious barn with a rustic air about it – was ideally chosen to fit the theme of the night. 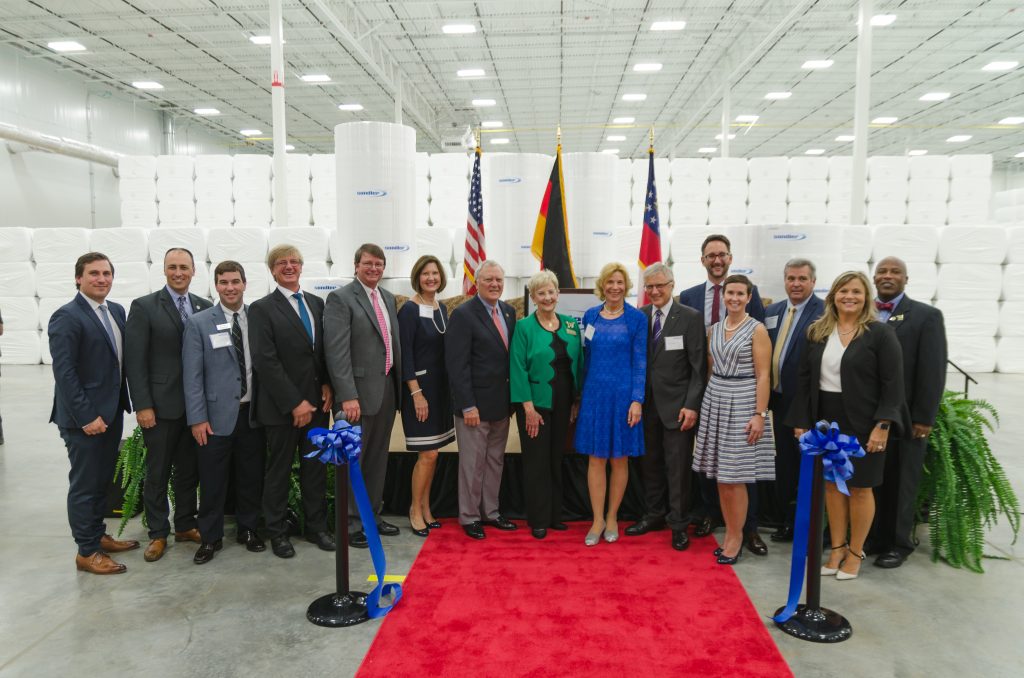