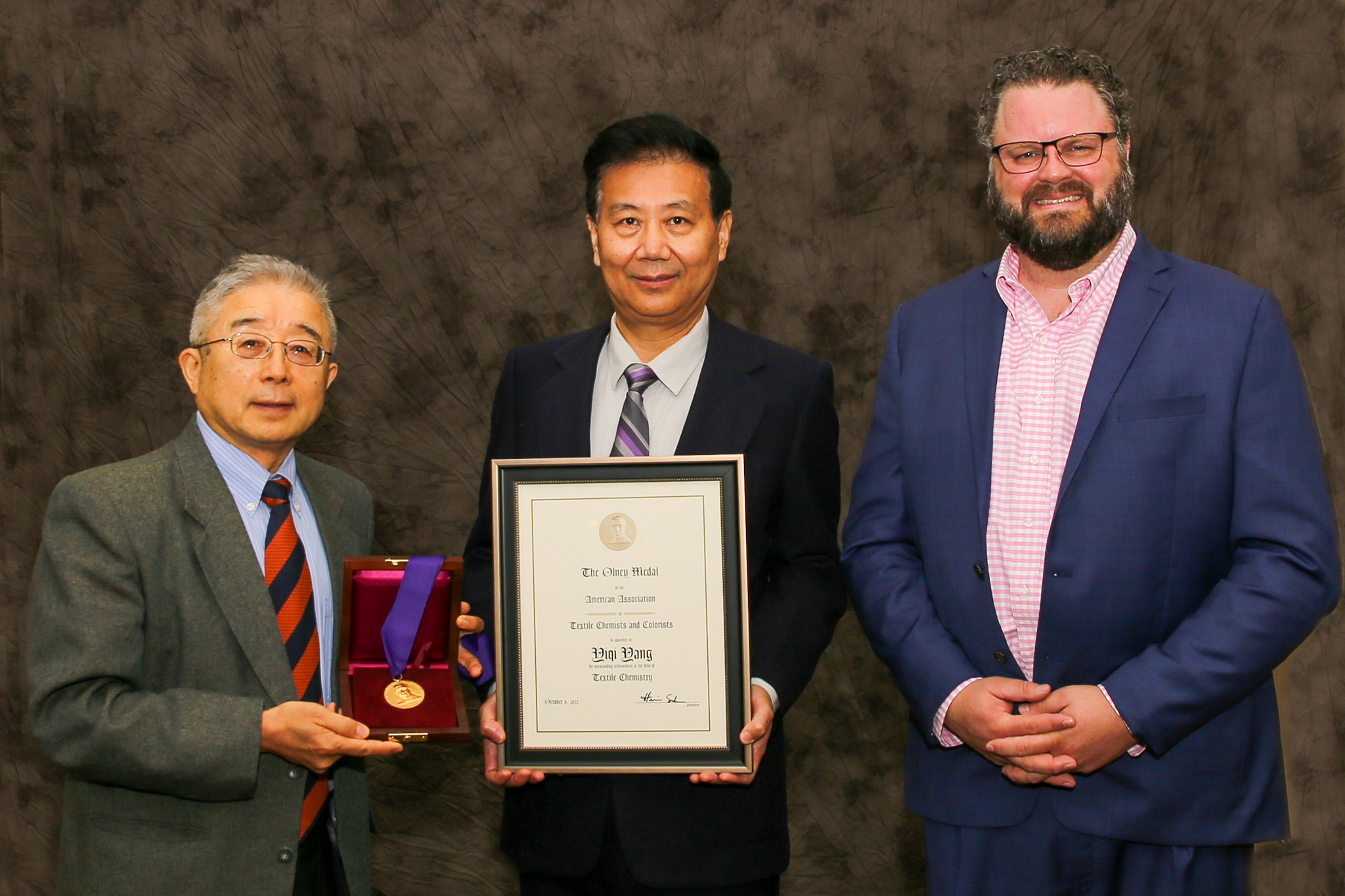 RTP, NC, October 13, 2022 – Yiqi Yang is the 2021 recipient of the AATCC Olney Medal for outstanding achievement in textile science. Yang is being recognized for his work on the research and development of sustainable, greener textiles. He received the medal from friend and previous Olney recipient Gang Sun at the AATCC Textile Discovery Summit in Charlotte, NC, USA (www.aatcc.org/summit). Yang’s contributions to textile science include the development of new biobased fibers and textile chemicals from agricultural wastes and co-products, and cleaner productions in coloration and finishing. His pioneering research on new biofibers such as 100% protein fibers from poultry feathers, and stereo-complexed PLA fiber with excellent resistance to hydrolysis during high temperature textile processes are examples of his work.

To see past award recipients, or nominate a future recipient, visit:
www.aatcc.org/olney 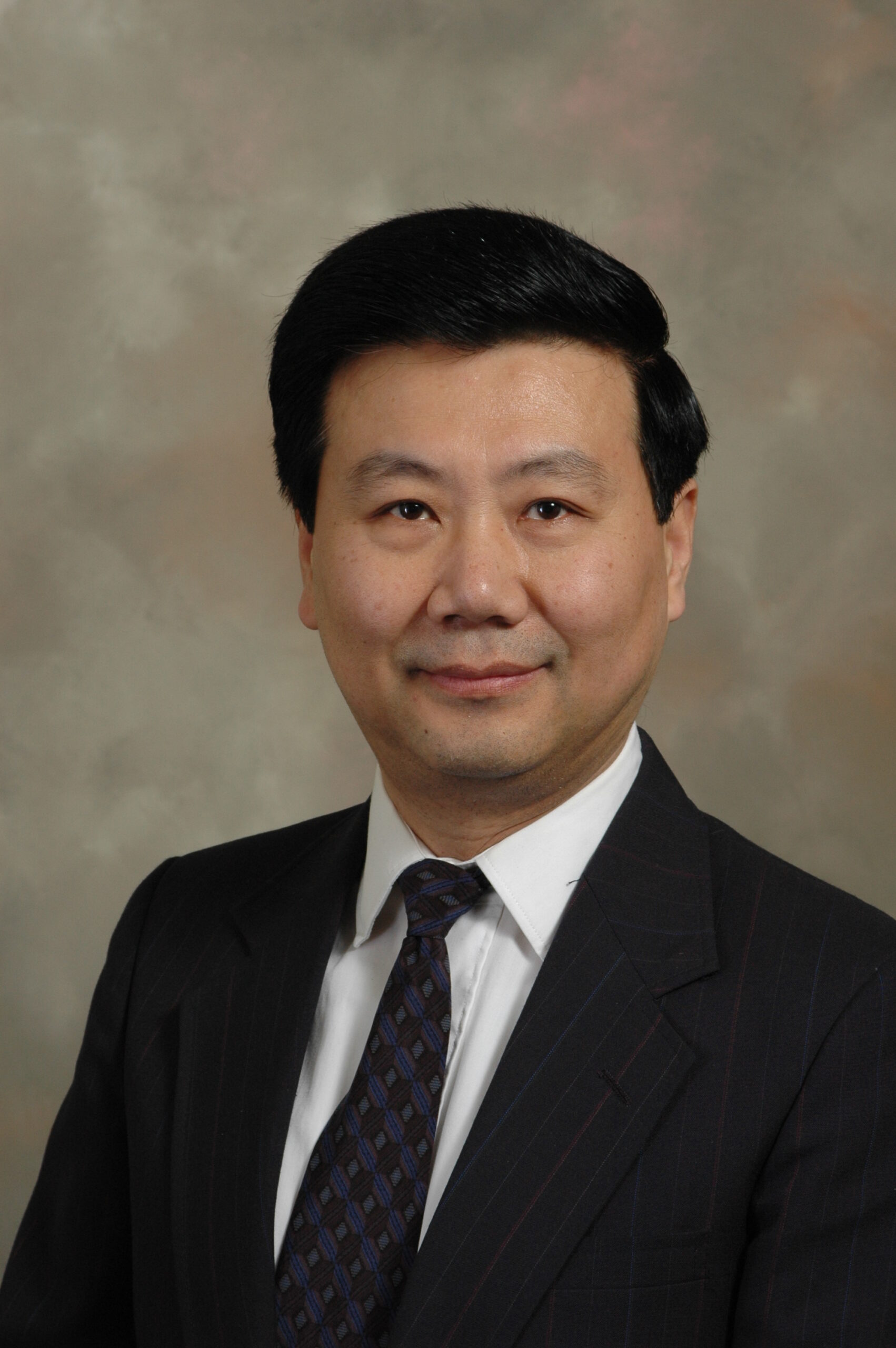 A prolific researcher, Yang spent his career in the Midwest, working with farming communities to take what would be considered unusable waste and transforming it into a clean, sustainable, usable product. Take, for instance, chicken feathers—Yang, along with his collaborators, found a way to transform this large waste product into textile fibers that can be incorporated into fabrics. Yang and his team were able to perform cross-linking using saccharide aldehydes. By modifying the molecular structure and concentration of these aldehydes, they created keratin fibers that were found to be stronger than any other keratin-based fibers. Not only do the keratin fibers from feathers show great promise in holding their strength in fabric when immersed in water or when dry, they also “have excellent dyeability and colorfastness with acid dyes.”1

Yang’s research has also uncovered a way to create plastics that are biodegradable through plant-based alternatives found in the textiles and materials industry. Yang and his lab began to collaborate with researchers from Jiangnan University in China in the early 2000s on this concept. Through their research, they discovered that polylactic acid or polylactide, found in cornstarch and other plants, is a more environmentally friendly alternative to petroleum-based plastics. By heating the plastic with polylactide to a higher degree and allowing it to cool slowly, the researchers learned that the plastic was more durable in hot or cold temperatures, making it more suitable for the textile and materials industry.2

Throughout his career, Yang has worked with his students and collaborators to find ways to create a more “sustainable and environmentally responsible textile industry.” His research in agricultural products and co-products have had far-reaching impacts locally, nationally, and internationally.

Yang earned an MS in Textile Chemical Engineering from China Textile University (Donghua University) in 1984, and a PhD in Textile Science from Purdue University in 1991. Soon after receiving his PhD, he began his career as an assistant professor at the University of Illinois at Urbana-Champaign. After four years, he joined the Institute of Textile Technology (ITT) as an associate professor. Two years later, he joined Monsanto and worked for one year as a senior research specialist before going back to ITT in 1997. He progressed at ITT to professor and director in the Department of Chemical, Energy, and Environment before moving to the University of Nebraska-Lincoln in 2001, where he continues his research as the Distinguished Charles Bessey Professor in the Department of Textiles, Merchandising, and Fashion Design and the Department of Biological Systems Engineering.

Yang has written 285 refereed journal articles and numerous refereed conference and proceeding papers. He authored one book, edited two books, and wrote numerous book chapters. He has eight patents and several patent applications. He has over 190 national and international news interviews and media reports.

In 2018, Yang was recognized with the “Fashion Impact Award” as Educator of the Year from the Fashion Institute Midwest. In 2017, Yang received a Certificate of Recognition for Contributions to Students. This award was organized by the Division of Student Affairs and co-hosted by the University of Nebraska-Lincoln Parents Association and the University Teaching Council. Students and parents nominated teachers who had “made a significant contribution to [students’] lives while at the university.” In 2007, Yang was recognized with the Faculty Student Mentoring Award of the College of Education and Human Science.

In 2011, Yang received the Research Award from Gamma Sigma Delta (The Honor Society of Agriculture) Nebraska Chapter. Yang was recognized with the Charles Bessey University Distinguished Professorship in 2007; it has been renewed in 2012, 2017, and 2021.

In 2007, Yang was also recognized with the “Big 12 Rising Star Award” that is presented by the Big 12 Center for Economic Development, Innovation, and Commercialization (CEDIC) at the Big 12 CEDIC Innovation and Capital Formation Conference held in Kansan City, MO, USA. Only one faculty member of each of the Big 12 Universities was awarded this honor.

A member of AATCC since 1990, Yang chairs the AATCC Foundation Student Research Support Grant Program and Review Board and has handled this annual program since 2005. He also has served as the faculty advisor of the AATCC Student Chapter at the University of Nebraska-Lincoln since 2003.

Established in 1944 in honor of Louis Atwell Olney, the founder and first president of AATCC, the Olney Medal Award recognizes outstanding achievement in textile or polymer chemistry or other fields of chemistry of major importance to textile science. The award consists of a gold medal, a scroll, and an honorarium.

Presentation of the Medal each year is a highlight of AATCC Textile Discovery Summit. This year, the Summit was held October 4-6 in Charlotte, NC, USA. Yang also delivered the traditional Olney Medal Address at the Summit. The title of his talk was “A Small Step Towards a More Sustainable, Responsible, and Profitable Textile Industry.”