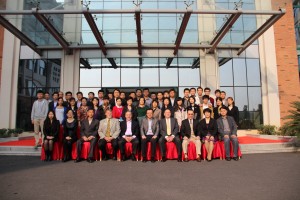 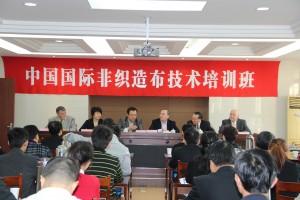 Cary, NC – November 22, 2013 – INDA, the Association of the Nonwoven Fabrics Industry, had a busy Fall in China advancing its global partnerships to enhance member access to new markets. INDA was a sponsor of the Asia-Pacific Nonwovens Symposium held October 22 in Shanghai. INDA President Dave Rousse delivered an opening welcome to the group and spoke individually with several of the Asia-based senior executives attending the Symposium from North American companies. The event was organized by RISI and WTiN. INDA’s strategic partner in China, CNITA, the China Nonwovens & Industrial Textiles Association, was also a sponsor and speaker.

INDA had a presence at the Shanghai International Nonwovens Convention & Exposition, SINCE, in Shanghai. Rousse participated in the ribbon cutting ceremony and then walked the show floor with event organizer Wang Yangxi of CNTA Science & Technology Co. Ltd. INDA exhibited at the show with multiple Chinese firms desiring to learn more about INDA.

Later that week, INDA co-organized with CNITA the China International Nonwovens Conference 2013 in the Chinese textile hub city of Shaoxing. Over 230 Chinese nonwovens executives attended this event that included a report from Rousse on Worldwide Nonwoven Statistics & Trends. Li Lingshen, President of CNITA also spoke on The Development of the Nonwovens Industry in China. In addition, presentations were given by the leaders of EDANA, the European-based Nonwovens Association, the Taiwan Nonwoven Fabrics Industry Association, and the Association of the Nonwoven Fabrics Industry of Hong Kong. Formal dinners followed the Conference where relationships were further strengthened among INDA and the Asian associations. INDA and CNITA entered discussions on advancing the relationship to a strategic alliance with associate membership opportunities for certain Chinese nonwoven companies expressing interest in aligning with both associations.

Dave Rousse commented on the success of the trip, “INDA has a strong brand in China and southeast Asia as a leading source of information and services that advance the nonwovens industry globally. Partnering with CNITA to co-sponsor one symposium in Shanghai and co-organize another in the heart of their textile industry area in Shaoxing demonstrates to the Chinese nonwovens industry that we are helping them advance the industry there. It should provide confidence to INDA members that we are well positioned to connect and expedite INDA member business initiatives in China. It was also positive to personally connect again with our association counterparts from Hong Kong, Taiwan and Japan and share with them the knowledge of our product stewardship activities in areas of mutual interest.”