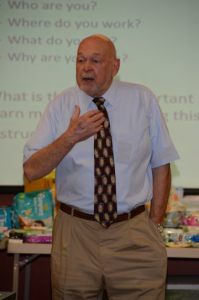 Professor Vaughn shared his vast knowledge, expertise, and leadership with students and professionals from around the world for decades and was known as “Mr. Nonwovens of the US”. He was a valued educator and consultant for INDA for many years. In 2007, Professor Vaughn received the IDEA Lifetime Achievement Award for his many outstanding contributions to INDA and the nonwovens industry.

One of his distinguished achievements was serving as the Managing Editor for the Journal of Engineered Fibers and Fabrics. In this role, Professor Vaughn reviewed the technical work of new and seasoned researchers giving them the opportunity to expand their work.

He was a graduate of Lynchburg College and earned his Master’s in Textile Technology from the Institute of Textile Technology and his Ph.D. in Textile Physics from the University of Manchester. Professor Vaughn joined Clemson University serving as Department Head and then Director of the school from 1977 through 1989 before retiring as Professor Emeritus. He was the Instructor of INDA’s popular Intermediate Nonwovens Training Course from 2001 until his untimely death in August 2015.