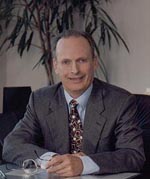 A graduate of Georgia Institute of Technology, Ted Wirtz spent over 30 years working in Fortune 500 companies.  He held both line and staff positions in sales and marketing, strategic planning and business development.  In 1988, Mr. Wirtz left the large corporation business environment to pursue a career in management consulting, focusing on questions of corporate and business strategy, marketing strategies and tactics, market and competitor profiling and linking market needs with core competencies.

In December 1996, Mr. Wirtz was elected to President of INDA, The Association of the Nonwoven Fabrics Industry based in Cary, NC.  INDA is an international trade association with 275 corporate members, a staff of 21 and an annual operating budget of $4 million.  INDA membership includes many internationally recognized companies such as Ahlstrom, Cardinal Healthcare, Clopay Corporation, BBA, DuPont, Freudenberg, Georgia Pacific, Kimberly-Clark, 3M, Proctor & Gamble, PGI and other leading companies.  Mr. Wirtz is a frequent speaker at nonwoven and other industry conferences worldwide and an advocate promoting the global growth of nonwovens.  He serves on the Executive Committee of the Nonwovens Cooperative Research Center at North Carolina State University and on the External Advisory Board of the School of Textile and Fiber Engineering at Georgia Institute of Technology.

In his seven years as President, Wirtz has an exceptional track record, setting new direction and establishing new INDA records.  Under his leadership, the number of corporate members has more than doubled; overall revenue has increased 40%.  As a result of this revenue growth, INDA dues have not risen in a decade and held steady at only 20% of total association revenues, thus significantly enhancing the value of the organization to all its members.

In addition, numerous services have been initiated to support critical segments of the industry…e.g. automotive, filtration, medical, hygiene and consumer products.  Many new publications and informational resources have been developed including the INDA website and detailed industry statistics covering both North America and worldwide to enhance the knowledge of INDA members and the general public regarding the major markets, key forming technologies, volumes and trends in the nonwoven industry.