On July 11th, the grand opening of Sandler’s new production building and nonwovens line brought 250 guests from the political and economic spheres to Schwarzenbach. Totalling 43 million Euros, this investment further is further testimony to the nonwoven manufacturer’s commitment to continued organic growth at the Schwarzenbach/Saale headquarters.

“The strong momentum in our sales markets surpassed the forecasts of our strategic planning. […] When “Plant 4″ was commissioned in 2011, I assumed that it would be 8 to 10 years at least before we were to start the construction of another building”, said President & CEO Dr. Christian Heinrich Sandler in his opening address. This July, however, the new production and warehouse building “Plant 5” was completed, having taken only a little over a year’s time to be built. While the building itself was still under construction, assembling of the new production line started in December 2015. “We succeeded in tapping into new, interesting areas of application and in introducing new products to the market. This development required a new production line, a new building for it to be placed in and additional warehousing space for its finished goods. This 43-million-Euro investment creates 40 new qualified jobs in Schwarzenbach.” 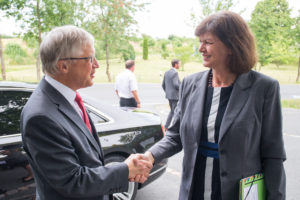 Ilse Aigner, Bavarian State Minister of Economic Affairs and Media, Energy and Technology, congratulated the family-run company on its continued success and growth over the past years: “Sandler is […] nothing less than a driver of innovation that runs smoothly. Here we have a cutting-edge Bavarian family-owned and, above all, growing company: Sandler expands its production facilities, targets more and more international markets and—most importantly—creates good jobs in the region. This is beneficial to the company, but also to the common good. And it is more than enough reason for us politicians to say thank you and pay tribute to such achievements.” The state minister emphasized not only the strength of SMEs in Bavaria, but also the transition of the German textile industry toward technical textiles—a transition for which Sandler is a prime example. “In developing textile materials with innovative features new sales markets for textiles can be opened up in a variety of sectors. […] Innovation is our key to success!”

Dr. Hans-Peter Friedrich, Member of the German Bundestag, also offered congratulations to Dr. Sandler and the Sandler team, particularly stressing the willingness of the company’s management to assume responsibility—for the staff members and for the people in the region: “Sandler is not only characterized by entrepreneurial achievements, but also by its strong ties to its home region.”

150 meters long plus a loading terminal of 37.5 meters; 70 meters wide and about 20 meters high “Plant 5” is Sandler’s largest production building. The nonwovens manufacturer invested 17 million Euros into the building located at the South-East perimeter of the company premises. Since May, nonwovens for hygiene products are being manufactured on the new production line at the ground floor. The hybrid technology applied represents a new generation of nonwoven technology. Sandler invested another 26 million Euros in this expansion of production capacity. On the upper level, 10,500 sqm of warehousing space are at hand for the finished roll goods, as are 2,600 sqm commissioning and loading area as well as office space. A colour concept in green, yellow and blue tones applied for the façade harmoniously integrates the building into the surrounding landscape as well as Sandler’s company premises.

On occasion of the inauguration, Sandler’s new image trailer premiered, allowing the guests a first look at the new production line and the products that are to be manufactured on it.

In their personal addresses, Heribert Trunk, President of the Chamber of Industry and Commerce for Upper Franconia, Bayreuth; Dr. Oliver Bär, Hof District Administrator; and Hans-Peter Baumann, Mayor of Schwarzenbach, also commended Sandler’s commitment to the training of young professionals, staff development and the advancement of the region. They expressed their appreciation for the renewed decision to invest in the region, wishing the company, its employees and the family Sandler continued success and the courage to continue making landmark decisions in the future.

At the same time “Plant 5” took shape, Sandler also constructed a new, four-storey administration building in Schwarzenbach. In May, part of the Sandler team moved to the new offices, where state-of-the-art furnishings meet spacious design. The synergy of glass walls and acoustic partition walls provides a quiet, productive working atmosphere. And it is Sandler’s own nonwovens keeping (the) calm at the new workplaces: They are applied as sound absorbers in the acoustic partitions, dampening noise in the hustle and bustle of a day at the office. 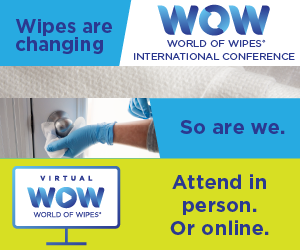